Since there’s been so much talking going on regarding the Volkswagen emission scandal, I thought, why not talk about something related to the whole cars and driving scene. A serious topic as well, but in a different way.

How many times have you been dead tired while driving, but haven’t stopped to take a nap? I bet all of us are guilty of that crime. Did you notice what I just did there? I said crime, and I actually did do that on purpose. Most of us probably just grab a cup of coffee to go and think they’ll be just fine, and most likely will even make it home safe. Then, when it’s a question of driving drunk, there are all kinds of campaigns and even the law telling us how wrong it is to drive when intoxicated. However, did you know that most car crashes in the U.S. don’t actually involve alcohol, and most people in car crashes are wearing seat belts? We are aware of the dangers of alcohol and the need to buckle-up, but drowsy driving still is an under-appreciated danger. 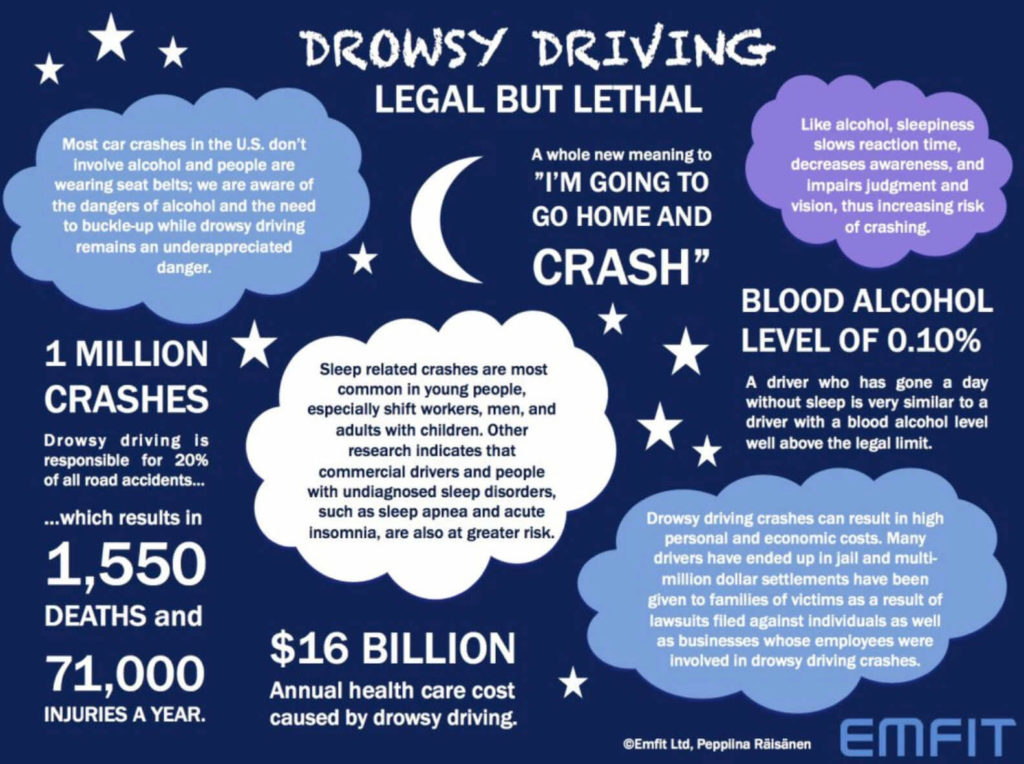 Car crashes rank among the leading causes of death in the United States.According to the National Highway Traffic Safety Administration (NHTSA) drowsy driving in the US alone causes approximately 100,000 crashes a year. This results in an estimated 1,550 deaths, 71,000 injuries, and $12.5 billion in monetary losses. Studies have shown that a driver who has gone a day without sleep is very similar to a driver with a blood alcohol level of 0.10%, which well above the legal limit. Just like alcohol, sleepiness slows reaction time, decreases awareness, and impairs judgment and vision, thus increasing the risk of crashing. Yet we underestimate the seriousness of drowsy driving.

Drowsy driving is just as dangerous as drunk driving. It is a real public health issue and deserves more attention, education, and policy initiatives. Many lives could be saved and disability avoided if drowsy driving was taken more seriously. So next time when you’re speeding through a dark highway in the middle of the night and your head is starting to nod and your eyelids feel super heavy, pull over and take a nap. Don’t you think that making it to your destination 20 minutes later than scheduled is worth possibly saving a life – yours, someone else’s, or maybe even that of someone you love.